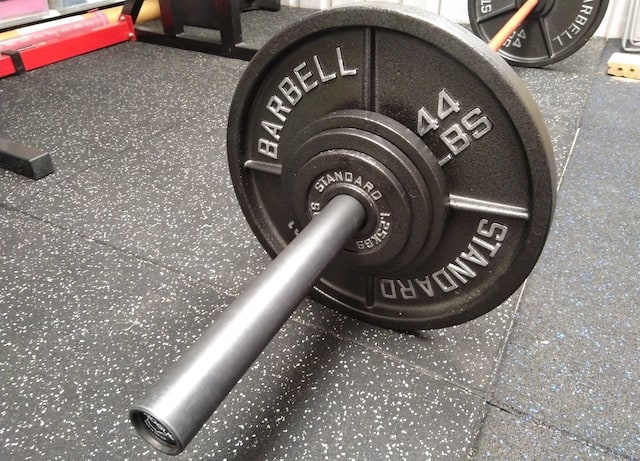 The Home Fit Freak participates in various affiliate programs, including the Amazon Services LLC Associates Program. As an Amazon Associate we earn from qualifying purchases. If you click an affiliate link in this article, we may earn a commission at no extra cost to you. Learn more.

We’ve previously looked at these cast iron plates from Rogue in our rundown of the best Olympic weight plates currently on the market.

Now, I’m going into greater depth with a dedicated review because these are popular Olympic weight plates and, despite the catch cry of some reviewers, all plates are not made equal (even if you’re not competing).

About 9 months ago, I purchased: 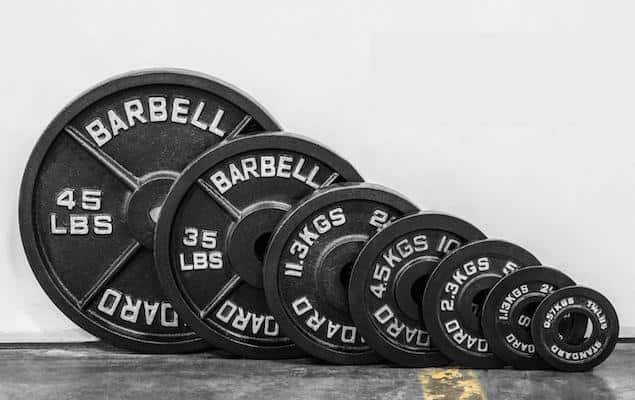 All-in-all these are fantastic plates, even though they’re not US-made like a lot of Rogue’s stuff. They have that old-school iron look and feel to them; they’re heavy, noisy cast iron, and they’ll do exactly as they’re intended to do.

While some may complain about the finish chipping off easily, it’s not something I’ve experienced in the time I’ve had them (roughly 9 months, used 4 – 5 times per week). In fact, they’ve held up remarkably well, and still look almost as good as new. Compared to some cheaper, no-name plates I have, these fit very nicely on my bar’s sleeves – there’s very little slop, especially on the heavier plates.

Finally, the tolerance of these plates is very low, meaning their weights are spot-on. If you’re after some simple, classic black plates to help you make regular, noticeable gains then these are certainly worth a look.

These plates are cast in the classic, old-school style with center ribs on the larger plates.

On these larger plates, there’s a lip around the plate’s edge makes them easier to lift and carry compared to other steel plates (such as Rogue’s calibrated steel plates). Yes, they take up more real estate on the sleeve, but I don’t lift anywhere near enough for that to be a problem.

When compared to the pair of 25kg calibrated steel plates I have, these plates are significantly easier to carry from tree to sleeve. Plus, I can carry them with one hand. This may seem like a minor thing, but over the long-term, these old-school cast iron plates are actually much less annoying to use than the calibrated plates. 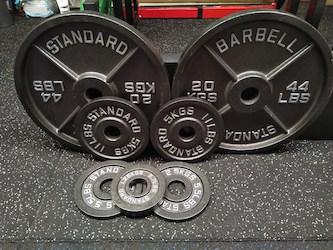 The heaviest plates have ridges on the inside of the center bore. This is presumably to minimize slop, and help keep them on the sleeve if and when you lift without a barbell collar. However, if you’re not controlled in how you add and remove them, they can stick and scratch the shit out of the your sleeve’s finish. This is especially true when using them with barbell’s that also have ridged sleeves (like the Ohio bar). Not only have my Cerakote Ohio Bar’s sleeves taken a bit of a beating, it can also make a helluva racket when putting them on and taking them off.

Some diligent barbell maintenance (which you should be doing anyway to preserve and prolong the life of your barbell) will prevent this from becoming more than a mere cosmetic issue. I wipe a few drops of 3-in-1 oil onto the sleeves of my bar every 6 – 8 weeks.

Ultimately, while these are some of Rogue’s cheaper plates, they’re still representative of the company’s trademark high quality. They’re well-cast with some small imperfections and they absolutely weigh up. While they don’t have a stated tolerance, all of my plates are within 1% of the stated weights. My 20kg pair are exact!

Prior to purchasing mine, I had noticed that some others have complained about the gloss black finish making these plates somewhat slippery. This is likely to only be a problem for the heavier weights. However, the lip around the plate’s edge makes this a non-issue for me. They’re easy to carry and none have slipped from my grip so far. Plus, while the gloss finish is a little slick, the casting isn’t perfectly smooth. As such, the roughage assists with gripping them securely.

As with most cast iron plates, the finish is a somewhat prone to chipping. This is a reality of steel plates that clang together. Mine have some small chips, and rust has started to set in on these spots. This really just adds to the aesthetic, and is not difficult to remedy with some touch up paint from the hardware store.

If you want to avoid this, you may want to check out the Rogue Machined Olympic Plates, which look exceptional but cost a good deal extra.

Finally, there are some minor imperfections in the casting. However, to quote Rogue Fitness themselves, quality plates should be all about performance, and not winning beauty pageants. That basically sums up my feelings on this issue.

All-in-all, the quality of these Rogue Olympic Plates is outstanding.

There’s not a huge amount to say here: These plates are extremely well-made and absolutely do the job of being heavy and well-cast. Get some, stick to your training program (whatever), and they will make you strong. Simple as that.

Being steel plates, they’re best suited to controlled powerlifting as opposed to the more dynamic Olympic lifting. Dropping these plates, as you can imagine will cause them to become more banged up more quickly. Honestly, they’ll easily withstand the occasional drop. But, if you’re a regular dropper (you shouldn’t be) then get some bumper plates.

Rogue’s Cast Iron Olympic Plates are awesome. They’re well-made, have a very low tolerance, and broadly do the job they’re intended for. You can get cheaper plates on Amazon, but these are definitely worth the money you’ll pay for them.

The Not So Good

Articles on The Home Fit Freak often contain one or more affiliate links to merchants such as Amazon and Rogue Fitness. As an Amazon Associate we earn commissions from qualifying purchases.

That means when you make a purchase after clicking an affiliate link, we receive a small commission. This occurs at no extra cost to you.

You can read our full affiliate disclosure by clicking here. 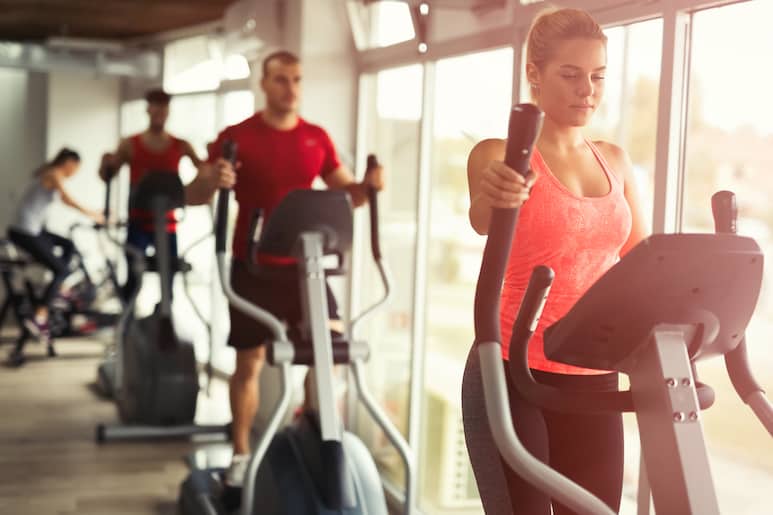 7 Surprising Benefits an Elliptical Machine Can Provide You 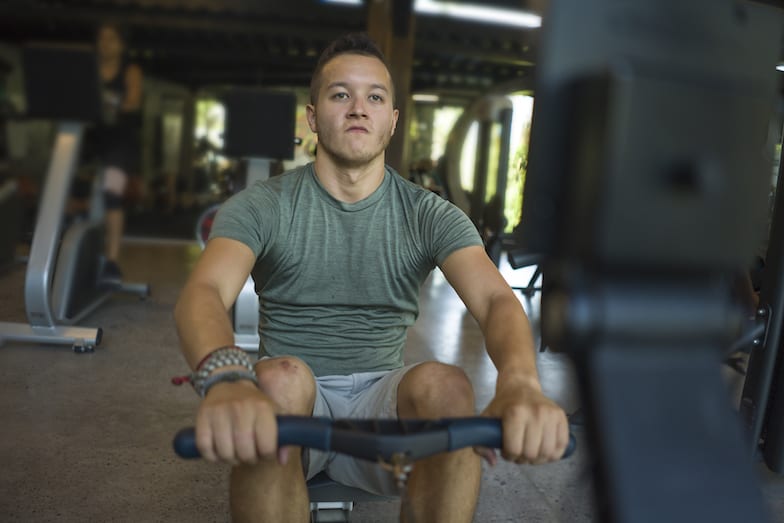 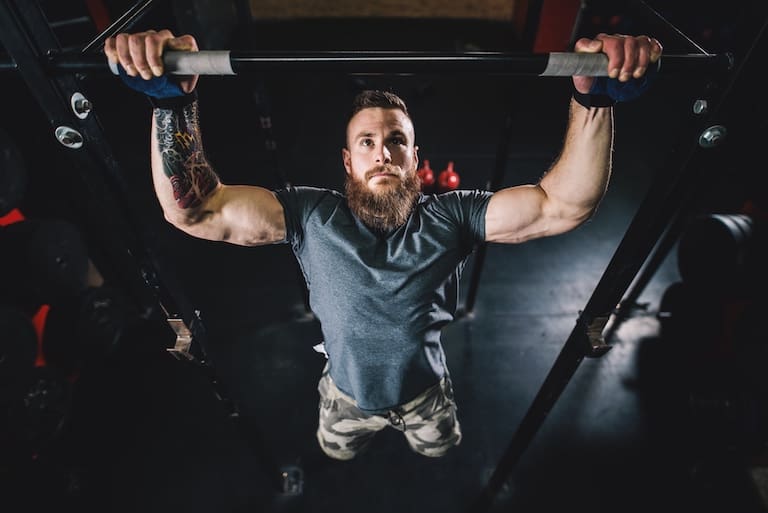